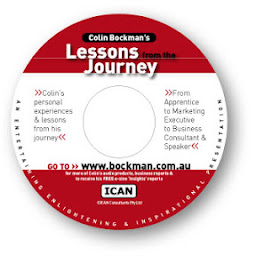 Ready to look at your next sales solution?
Click to find out more

Everybody asks the same question how do I motivate my people? Do I have an injection? What do I do to motivate them? And do you know what you can’t motivate people. You can only provide them with an environment where they become motivated.

Aha! But I hear you say everyone of these people behind me wants more money, if I give them more money, they’ll be motivated. Wrong. It doesn’t happen. It doesn’t work. All it does is raise their standard of living then they want more.

How do you motivate people?

Well in this little booklet here, which takes about 30 minutes to read, are all the answers. Yes you can read the other books, you can do whatever you like, but all of the answers are in here. In fact, it’s very simple. The first one is, and in fact let me just go through and have a look what the first one is. The first point is full appreciation for work well done. That is the most important thing that gets missed day after day after day in businesses. In fact what happens is the people who do really, really well, the managers ignore them. It’s called the Australian leave alone zap process. Leave them alone because they’re doing okay, only zap them if they do something wrong and then they go and work on the lower performers over here; crazy stuff. As soon as somebody does something well, does it right, gets it right, whatever, recognise that and all of a sudden people become motivated because everybody in their being loves to succeed and when they’re rewarded and recognised for having succeeded, that’s what motivates them. That’s #1.

#2 is, wait a minute what’s #2? In the book it says people want to feel in on things. Yup, they want to feel in on things. They want to be involved. In fact I find that when I work with organisations, I was working with one just a little while ago where we had people from the warehouse who weren’t involved. There’s a channel between the two, here’s the warehouse and here’s the salespeople. And we’ve involved the warehouse people in the sales meeting. And they said “why? They’re not going to be able to contribute in any way” when in actual fact they did but the whole thing was they understood what was going on. They felt more involved and all of a sudden they’re more receptive to doing things differently to help the sales get to the ultimate outcome. It doesn’t matter who it is, it doesn’t which one of these people and what they do on a daily basis, if they’re recognised for the work that they’re doing, if they feel in on things, they feel more part of the team. 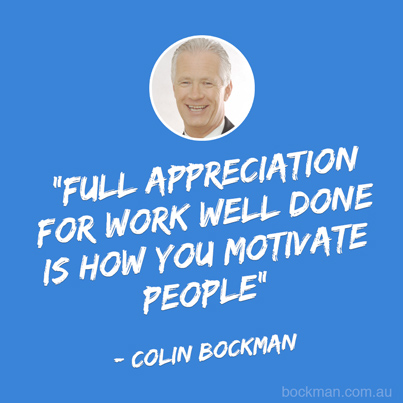 What’s #3? Having a sympathetic understanding for personal problems. I don’t want to open Pandora’s box right now and go deep into that but I can tell you this people now find their work environment to be their more solid and secure environment than their home environment and psychologically there are a whole heap of reasons for that. And that’s why the managers now have to take a slightly different approach. I don’t want to get into it right now but there are some stories behind that one.

The 4th one is, don’t need to go there, #5, #6, oh #6 do you know what that is? More money. That’s what the surveys tell us that motivates people right at the top feeling like they’re being rewarded and recognised for a job well done, down #6 here. By the way, you have the complete reverse when you look at what the managers says that they think is what motivates people, what the staff say and you looked up and the level is like this, they’re totally different.

It’s pretty simple to motivate people and I can give you some really good stories on this. Let me just give you this one on a car dealership. I was talking to the dealer principal and he said to me “how do I motivate the guys in the sales department and so forth, I’m so removed from them.” I said “where do you park your car?” He said “I park my car down the back.” I said “where do you walk up to the showroom, up to the front office?” He said “I walk up the road.” I said “why don’t you walk through the service department?” He said “why would I do that?” I said “so you can touch base and talk to the people.”

So I showed him what to do. So he’d walk in the service department where he talk to one of the technicians here, one of the technicians there, you ask them how’s things, what’s happening and have a conversation with them. And then walk up through the sales guys, instead of asking them how many they’ve sold for the day, he’d ask them what they’ve achieved for the day. A whole host of different questions he would ask. Anyhow, he started to do this and all of a sudden he got this totally different attitude from his people. They were there to try and make the dealership more successful, but I got to tell you the tail of the story.

He rang me some months later after he was doing this. He said “Colin, just thought I’d give you a phone call. I walked today up the roadway and into my office and I didn’t go through the service department” and I said “you’re telling me that for what reason?” He said “I just didn’t have the time to have all the conversations that I would normally have on my way into the office” and I said “that’s what you call a high class problem” and he said “it sure it.” He totally changed the whole culture of that organisation by giving people recognition and reward for work well done.

The problem is today we got too many jolly emails, texts, meetings, everything else that we forget to do the real things. There’s just some stories and some ideas for you. This little booklet does the whole thing in 30-minute read.

How to motivate people?

Not that hard. They all respond to the same things. 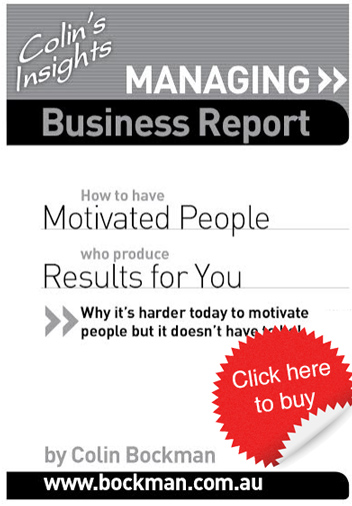 Tags:
Back to Top

Colin Bockman
A sales veteran with 30+ yrs of experience who has worked with the largest brands in Australasia. If you are a Marketing/Sales Manager or an MD who wants to Shift Thinking of their troops and create an innovative Selling Methodology to blast their opposition away, then get in contact with Colin for examples of how he has achieved results for companies in a similar position to yours.... a 15 minute 'triage' of your situation over the phone may well lead to significant Sales Increases for you! Click here to read, what Colin’s Clients say about his work
Recent Posts

A sales veteran with 30+ yrs of experience who has worked with the largest brands in Australasia.

Colin's personal experiences & Lessons from his journey - From Apprentice to Marketing Executive to Business Consultant & Speaker.

I'm not around right now. But you can send me an email and I'll get back to you, asap.